Nigel, a handsome gannet bird who lived on a desolate island off the coast of New Zealand, died suddenly this week. Wherever his soul has landed, the singles scene surely cannot be worse.

The bird was lured to Mana Island five years ago by wildlife officials who, in hopes of establishing a gannet colony there, had placed concrete gannet decoys on cliffsides and broadcast the sound of the species’ calls. Nigel accepted the invitation, arriving in 2013 as the island’s first gannet in 40 years. But none of his brethren joined him.

In the absence of a living love interest, Nigel became enamored with one of the 80 faux birds. He built her — it? — a nest. He groomed her “chilly, concrete feathers . . . year after year after year,” He died next to her in that unrequited love nest, the vibrant orange-yellow plumage of his head contrasting, as ever, with the weathered, lemony paint of hers.

“Whether or not he was lonely, he certainly never got anything back, and that must have been [a] very strange experience,” conservation ranger Chris Bell, who also lives on the island, told the paper. “I think we all have a lot of empathy for him, because he had this fairly hopeless situation.”

As he persisted in this futile courtship, Nigel accrued something of a fan base. Mana is a scientific reserve that, like other New Zealand islands, has been the focus of replanting and rodent eradication efforts. Friends of Mana Island, one of the groups that has planted trees and shrubs, that Nigel “won the hearts” of members and volunteers who “spent many hours over the years maintaining the concrete colony.” 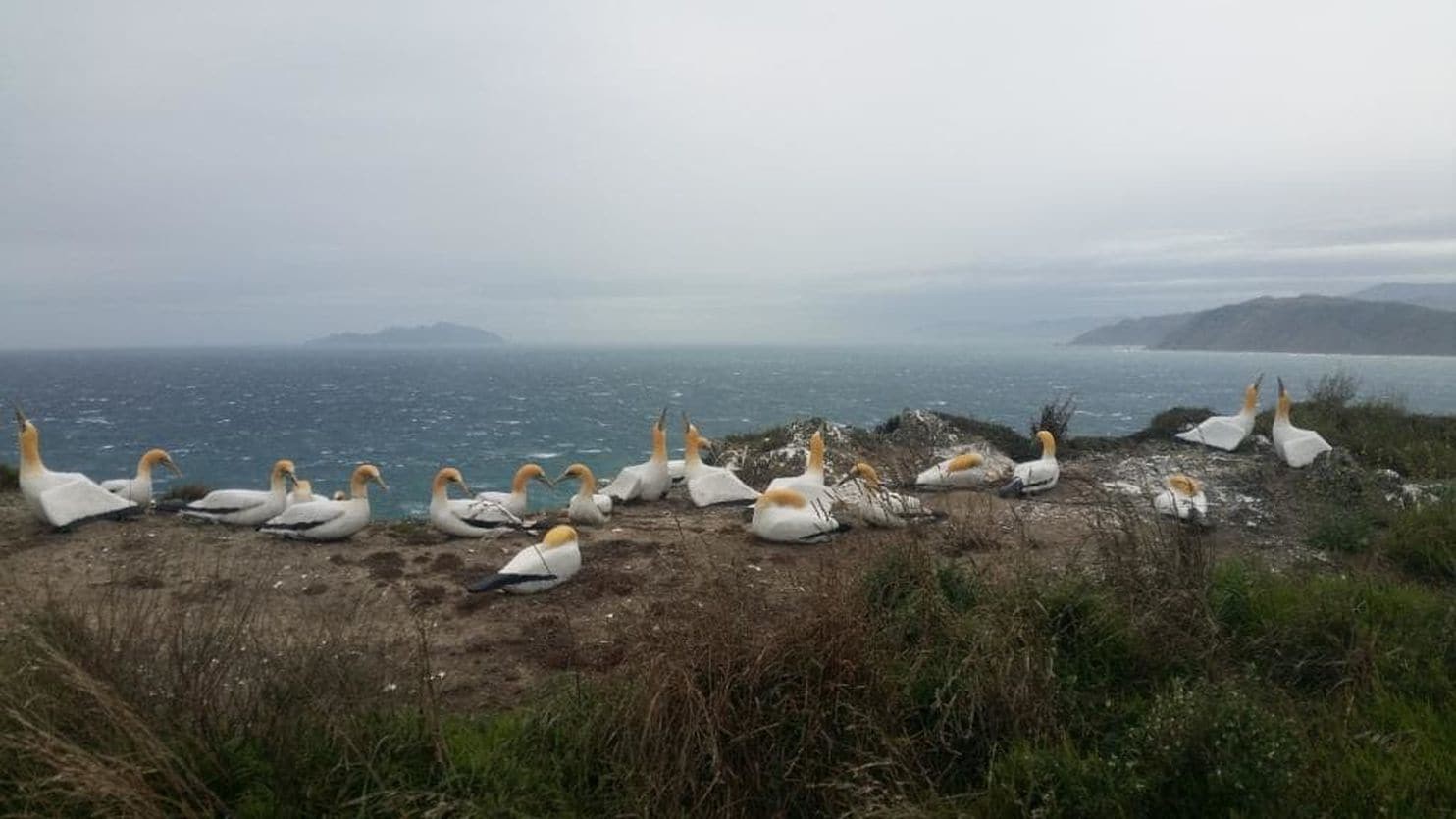 A photo of Nigel’s favorite spot on Mana Island, taken a few days after his death. The birds pictured are concrete gannet decoys. (New Zealand Department of Conservation)

Another gannet spent some time on Mana last year. Unfortunately, it was a he, dubbed Norman.

Perhaps the saddest twist to this tale is that three other gannets settled on Mana last month, after conservation officials tweaked the sound system used to attract them, according to the New Zealand. This raised the possibility of breeding. But Nigel paid them no attention.

“This just feels like the wrong ending to the story,” Bell told Stuff. “He died right at the beginning of something great.”

But Nigel — whose nickname was “no mates” — will forever be remembered as the pioneer of the colony and credited with signaling to the new trio that Mana was suitable habitat, Bell said. 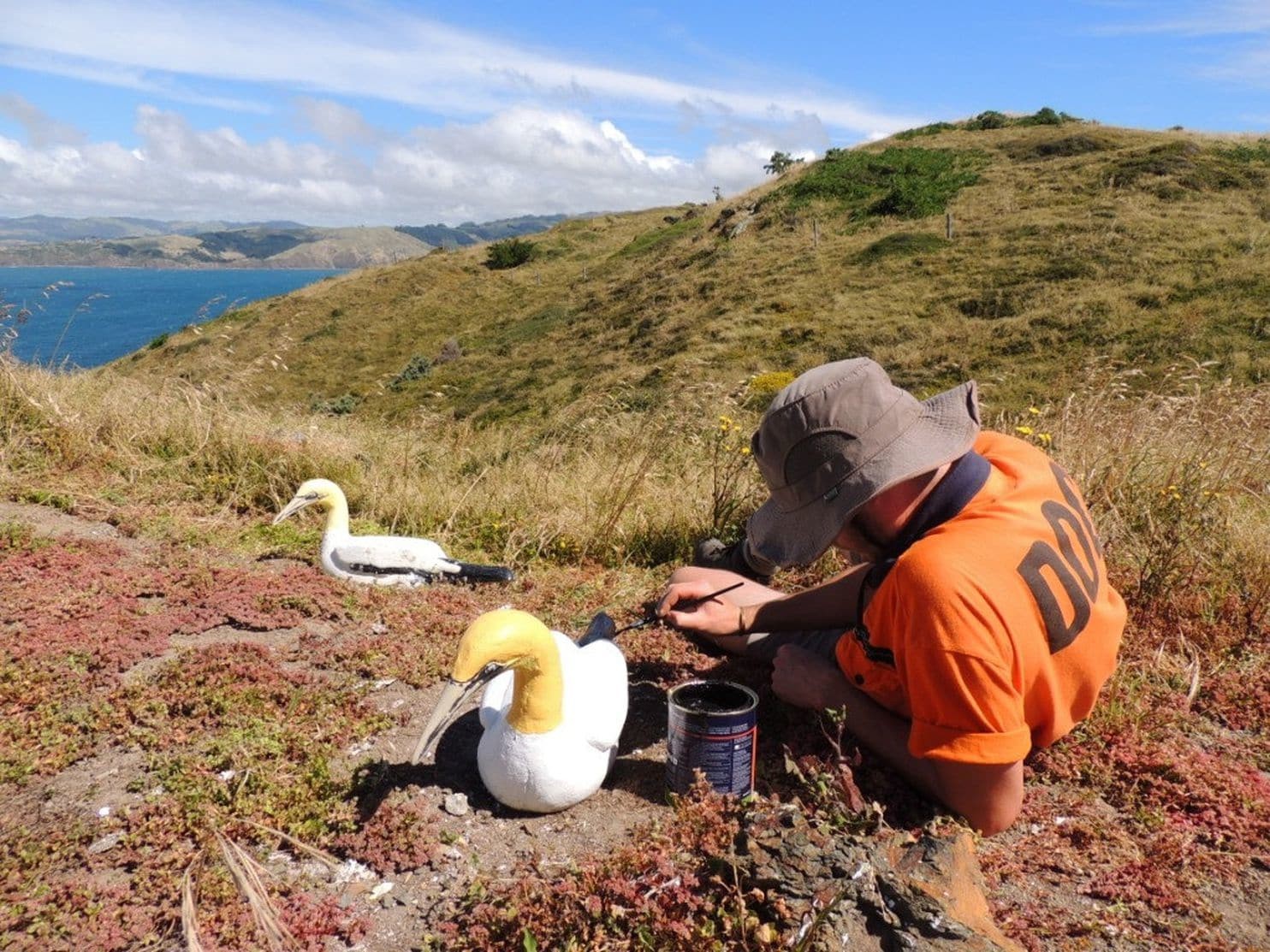 A volunteer paints a gannet decoy on Mana , a small island off the southwest coast of New Zealand’s north island. (New Zealand Department of Conservation)

On Thursday, Friends of Mana Island dedicated to the lonely castaway:

To Nigel
You stayed awhile on Mana Island,
Attracted by your concrete mates
You built a nest, you did your best
But only Norman dropped on by.

We weeded, we painted, we sprayed guano around.
We hoped you’d find the real thing.
Three newbies arrived, a Christmas surprise,
But suddenly you are gone.